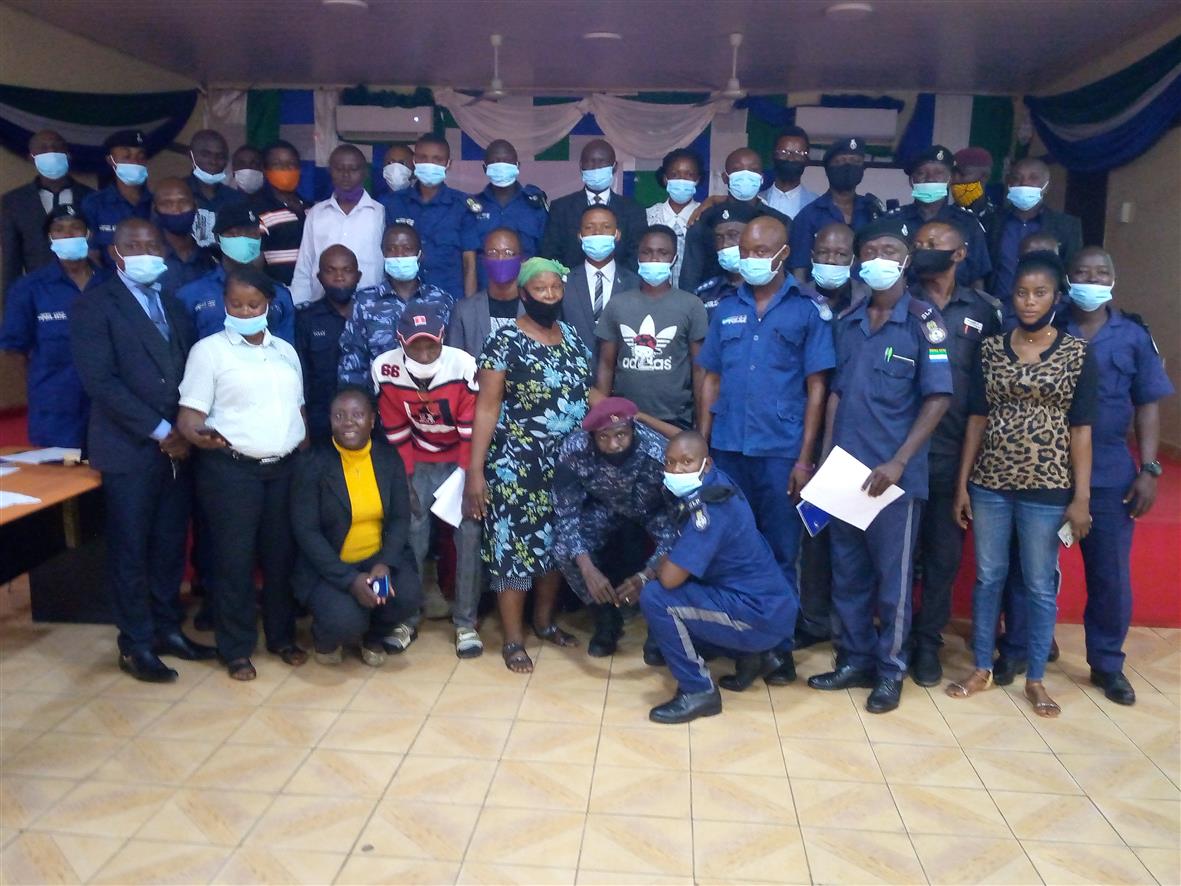 Bo, 9 July 2021. The Legal Aid Board with support from the United Nations Development Programme (UNDP) has conducted two separate trainings on the 2017 Bail Regulation for 100 Police Investigators and Prosecutors in Moyamba and Bo District respectively in the southern part of Sierra Leone.

These were the beginning of series of trainings to be held across the country by the Board on the Regulation targeting a total of 400 Police Investigators and Prosecutors. The aim is to create uniformity in the granting of bail both at the police and in the courts as prescribed in the Regulation.

The Chairman of the training in Moyamba who also doubles as the Legal Aid Board Regional Manager South, Martin Moriwai explained the importance of the training, adding that it underscores the Board’s continued effort at making justice accessible to  all especially indigent persons.

Mr. Moriwai said a good number of those in conflict with the law are not au-fait with it. He added that there are pressing challenges when it comes to the issue of bail whether at the police stations or in the courts.

He said the reason for the training is to capacitate the targeted group on the 2017 Bail Regulation taking into consideration factors or guidelines that they should consider when granting or denying bail to suspects at police stations on one hand and when objecting to bail to accused persons in the courts on the other. The reason he said is to curtail some of the bottlenecks suspects or accused persons faced when applying for bail whether at police stations or in the courts.

Speaking on behalf of the Executive Director, the Legal Aid Counsel for the South, Kabbah S Coomber Esq explained the object for the establishment of the Board, which he said is to provide, administer and monitor the provision of legal aid to indigent persons in both civil and criminal matters. He added that the Board also conduct Alternative Dispute Resolution (ADR) by way of mediation on civil and minor criminal matters as well as legal education through community and school outreach and radio phone-ins. He noted that the workshop will accord them the opportunity to understand the Regulation.

He said the Board wants to ensure consistent in bail application as provided for in the Regulation, noting that the idea is to help decongest correctional centres and police cells. He stressed that most of those detained in these centres and cells are there on bailable offences. “Police Investigators, Prosecutors and the Courts should see bail as a right and not as a means of punishment” he said, adding that authorities should treat all suspects and accused persons as innocent until proven guilty by a competent court.

Speaking on behalf of the Local Unit Commander (LUC) for the Moyamba Police Division, the Operations Officer, Assistant Superintendent of Police (ASP), Richard Yambasu expressed gratitude to the Board for organizing such a training in their area of operation. He said despite the short notice the Division was able to ensure that the participants were drawn from the 12 chiefdoms in the District.

ASP Yambasu said he would have loved to see administrators of both local and informal courts, and chiefdom police benefit from the training, noting that they also arrest and detain people.

The Deputy Chief Administrator of the Moyamba District Council, John L. Mansaray who spoke on behalf of the Chair of the Council, expressed optimism that issues of over detention and lack of information on the part of police regarding denial of bail will be mitigated.

Mr. Mansaray also called on the Board to conduct similar training for Local and Informal Court Administrators, whom he said are sometimes in the habit of overstepping their mandates.

Making an overview of the training, the Legal Aid Board Monitoring and Evaluation Officer, Sallu Jusu said the training is just a component of a broader UNDP support on enhancing justice delivery in Sierra Leone. This he said also deals with the rule of law and social cohesion.

Mr. Jusu informed participants that the training is not meant for Moyamba District alone but for seven other districts across the country, targeting a total of 400 Police Investigators and Prosecutors, 50 from each district.

In a PowerPoint presentation on the Regulation in Moyamba, Legal Aid Counsel who also doubles as the Board’s National Supervisor, Mohamed Korie Esq, schooled participants on what is bail, various types of offences, where to access bail, guidelines for prosecutors opposing or not opposing to bail, importance of granting bail, guidelines for bail, circumstances in which bail may be denied for indictable offences, what does it mean to be a surety and how does one cease to be one. The presentation in Bo was done by Legal Aid Counsel K. S. Coomber.

The two trainings were climaxed with group presentations followed by question and answer sessions from participants and trainers. 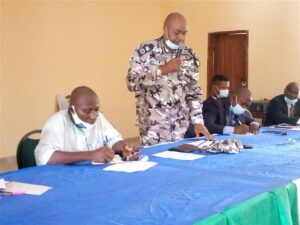 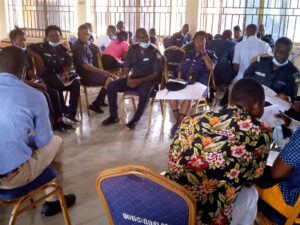